When we talk about United States, inevitably, our minds think up that is the land of big chances, great dreams and that we’ve witnessed each corner in a lot of famous movies. Nobody can deny the potential of his market, principally due to the extension of the country as the European Union itself, with and estimated of 446 million of people living there, indeed this represents more or less, the 5% of the current total world population.

So, if we are manufacturers and we want to expand our business, we wouldn’t dare to say that US is “a must”, because there are another potential markets where you can success, but once we reach out the way to fit our products in the North American market, we will have a good insurance for our company growth.

By the same token, the path won’t be easy, not to mention even once there, we will have to invest a lot of time and economic resources, to achieve a high Return of Investment (ROI) ratio.

FIRST STEP. CLOSE A DEAL WITH A GOOD DISTRIBUTOR.

Granted the choice to open our borders, the most effective way to start doing business in the States is to get a reliable customer or business partner that knows “how to import into the country”. Your distributor should be able to provide you with instructions on the invoicing, packaging, marking and labeling your products requires.

One way to reach out this commissioner, is assisting to specialized fairs in every field that you are working on, such as the as the International Production Processing Expo in Atlanta, the Toy Fair that it takes place in New York or the Clinical Lab Expo organized by the American Association for Clinical Chemistry (AACC) in Chicago, Illinois.

Another key point, when we’ll find the right person to manage our business there, is to stamp a sale & purchase contract stipulating in one of the clauses an INCOTERM, the most used with the U.S trades, are the EXW- Ex Works and the DDP- Delivery at Duty Paid.

It’s important to realize that if we agree the deal under the second term (DDP) and we don’t have previous experience in the logistic field, as well as, an accurate information about the Duty and Vat, this can become a serious problem for us. And of course, If we close the first one (EXW) – It would be better to use FCA– Free carrier– there is a non-written rule that we will have to follow the whole process to avoid the lack of trust from the costumer.

SECOND STEP. BE AWARE ABOUT THE LOGISTIC PROCESS.

As we always advise our customers, to avoid a collapse in the exchange, it’s important to hire good professionals in the subject so, if you’re reading this, we will be pleased to assist you and give you the best tips to arrange the operation.

Whether you decide to deal with “D” terms, apart from manufacturing the product, our liability will be: hire the almost whole logistic operation, handle the importer of record, grant a power of attorney to the customs broker and arrange an entry Bond (continuous or single), as a warranty of the payment of the duties.

Before, you should know that it’s mandatory to get a Food and Drug Administration (FDA) number, the license from Agriculture Department (USDA), or the approval from the Department of Justice, Commerce, Transport; always depending on the nature of the product that want to import.

In the majority of cases, the logistic operation is gonna be handled by the Forwarder Agency- the contractual carrier of the goods-, so he will arrange on your behalf, the Import Security Filing (ISF) if the cargo is transport by sea, and the Automated Manifested System (AMS) if it goes by air or sea.

In order to conclude this step, about the red points of the country – always speaking in cargo terms- the main Ports are LA, Newark- NY, Miami, Houston or Louisiana, among others, however, to point up the most important airports we find out for instance, Dallas, JFK, Cincinnati, LAX, Indianapolis and Miami; MIA, as a result of his privilege situation as Madrid in Europe, is a Hub for the American airlines to the South American Market.

In the event of election of Donald Trump in 2016, the main duty policy is pointed to “Buy America(n), hire America (n)” which seeks to create higher wages and employment rates for U.S. workers and to protect their economic interests by rigorously enforcing and administering our immigration laws.

Thus, has become a trade War, between U.S. and the rest of the world, firstly, he raised the duties for steel (up to 25%) and the aluminum (up to 10%) for those countries whose doesn’t get a minimum rate. The European Union, Canada, Mexico and China, consequently, sought their protection policies.

Among the leading actions by the European Union, one was a Commission Implementing Regulation (UE) 2018/886 to agreed compensatory duties to some products imported from US, such as, Harleys Davidson, Bourbon Whiskey or Levi’s Strauss.

The Canadian Government applied some Surtaxes in response, however, they reached an agreement to lift U.S. section 232 tariffs on Canadian steel and aluminum, as well as Canada’s removed the retaliatory countermeasures last year.

About the other adjacent country, Mexico, in response, agreed tariffs on imports of U.S. steel and farm products (pork meat, fresh cheese, cottage & grated cheese and potatoes), luckily for the involved parties, they reached a deal to remove both policies.

Finally, the main actor in this war, China; althought is low the import flow of steel from there to US, there is a huge list of products with updated tariff as meat, coffee, chemicals products. Because of this, the Chinese government has raised the duties to motorcycles, satellites, GNL, airplane pieces, computers and textiles, etc.

Henceforth, If Joe Biden is at the end lawfully elected, our forecast is that the situation won’t change radically, the policy “Buy America(n), hire America (n)” will be patent, and the efforts about the duties will be focus to reach some bilateral and multilateral deals, in this case, for instance, our spanish government should negotiate with America the exemption of the tariff for the bottled olive oil produced in Spain because, the current duty 25%, leave this product “made in Spain” out of the market.

As a matter of fact, ain’t fair for the industry this kind of limitations, the olive oil companies and the government itself, have invested a lot of money in marketing campaigns to promote them (see the attached pictures of Rafael Nadal’s below, the first one is the campaign launched in 2016, and the second one is the same image reproduced in Times Square, that takes in about half of a million of people per day), and forthwith they find the products out of the market for this extra fee, It applies the same example for those how want export Bourbon Whiskey to the Spanish Country. 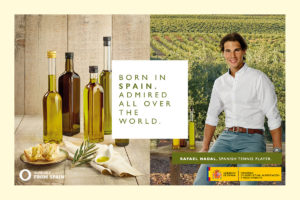 Important to realize, that there is a permanent dynamism on the import-export policies, and from International Transport Logistics Lawyers (ITLL) will be pleased to assist you and give our best advice. If you have any question about the matter, do not hesitate to contact us. Happy Thanksgiving, so much to be thankful for!

This website uses cookies to improve your experience while you navigate through the website. Out of these, the cookies that are categorized as necessary are stored on your browser as they are essential for the working of basic functionalities of the website. We also use third-party cookies that help us analyze and understand how you use this website. These cookies will be stored in your browser only with your consent. You also have the option to opt-out of these cookies. But opting out of some of these cookies may affect your browsing experience.
Necessary Siempre activado
Necessary cookies are absolutely essential for the website to function properly. These cookies ensure basic functionalities and security features of the website, anonymously.
Functional
Functional cookies help to perform certain functionalities like sharing the content of the website on social media platforms, collect feedbacks, and other third-party features.
Performance
Performance cookies are used to understand and analyze the key performance indexes of the website which helps in delivering a better user experience for the visitors.
Analytics
Analytical cookies are used to understand how visitors interact with the website. These cookies help provide information on metrics the number of visitors, bounce rate, traffic source, etc.
Advertisement
Advertisement cookies are used to provide visitors with relevant ads and marketing campaigns. These cookies track visitors across websites and collect information to provide customized ads.
Others
Other uncategorized cookies are those that are being analyzed and have not been classified into a category as yet.
GUARDAR Y ACEPTAR
ES
EN ZH ES
Abrir chat
Hola!
¿En qué podemos ayudarte?